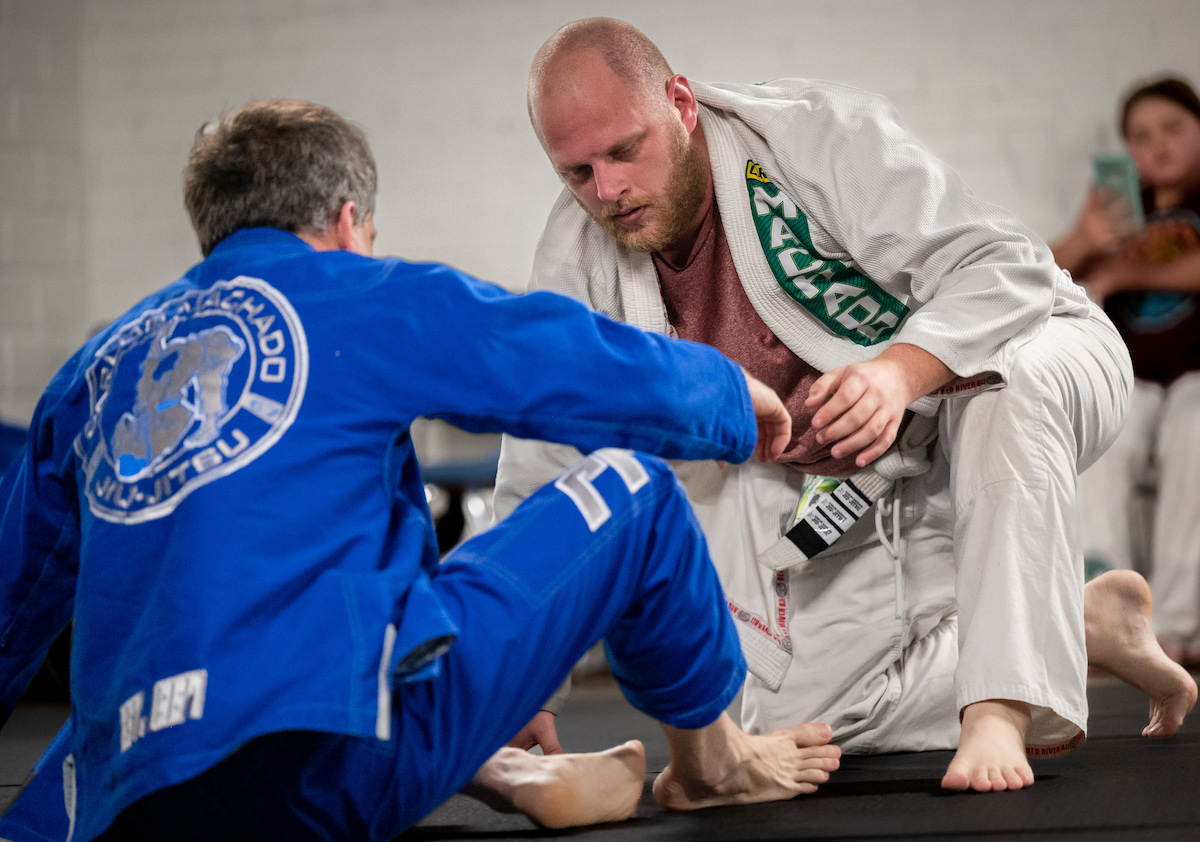 At our little club in Iowa Park, TX, we’ve been talking a lot about standards and think it’s important for everyone to have a good idea about where they stand as far as skill goes and what you should be working on at each belt level. BJJ is hard and it can feel like you’re not getting any better for long stretches of time. But that’s the main reason it’s so good for you and so good for teaching you how to fight and for self defense. You test yourself daily against a resisting opponent who does not want you to do what you want to do. And that opponent is also getting better everyday. This is powerful stuff.

So with all that said, here are my thoughts on what you should be working on at each belt level. Thanks very much to John Valentine for his input and for helping me refine some of my ideas on this. If you ever get a chance to train with John, you should jump on the opportunity.

You’ll notice that there are no specific techniques listed (arm bar, triangle, kimura, etc). As you get better and master the components of grappling, you can learn and apply any technique you see. The submissions are actually the least important part of learning BJJ. Position, posture, and control of your opponent are far more important and will determine whether or not you can actually make a submission happen.

Connection – purposeful use of limbs, attachments, and grips

Proficiencies at each belt to be considered for the next belt.

White belts are ready for promotion to blue belt when they:

This is relatively simple, but getting these concepts down and natural in live rolling takes LOTS of hours on the mats. You’ll be a white belt for about two years with consistent training.

Blue belts are ready for promotion to purple belt when they:

Purple belts are ready for promotion to brown belt when they:

My opinion on what’s going on at the brown belt and black belt level is probably largely irrelevant, but I think most will agree that the foundations of Jiu Jitsu are learned and refined from white to purple belt. The journey beyond purple belt entails further integrating the foundational components of grappling and developing your own style of Jiu Jitsu.

These concepts are ones I’ve been thinking about for a long time, and they are things I would have liked to have understood much earlier in my time as a practitioner and coach. I hope you find them useful.

2022 @startingstrength Gyms Coaches Conference is ON.
It’s so awesome to have a BJJ home and family after so many years of moving, different schools, and different coaches. @iowaparkbjj for life. Ride or die.
Strength Co. Utopia.
Lift. Shoot. Fight. December 17-18 at WFAC. We’re back! If you missed it the first time around, now’s your chance. If you went the first time, this one will be even better. Join us. It’ll sell out quick. #startingstrength #combatives #selfdefense #wftx #wichitafalls #shivworks
Starting Strength Gyms are hiring. We want personal trainers. You already have the people skills. We’ll teach you how to coach. Check us out at SSGyms.com
@startingstrength Seminars. Always a good time with good buddies and excellent participants.
It was me. I did it better. Nice try, @moviehater.
The way you feel on the inside when that sweep hits just right. #joy #blessed